WWPD 2013 exposure in progress....
Because the bathroomcam requires about 16 hours to expose photographic paper (figuring in a bunch of reciprocity error) I started a WWPD exposure this morning. It'll go 8 hours today, and 8 hours tomorrow...ending around the end of Worldwide Pinhole Day.
On the left is a photo of the bathroomcam's subject, chilling out in the backyard. On the right is inside the bathroomcam, image in progress.
I'm sure glad that we have a second bathroom! (-:
Happy WWPD!

Started my WWPD exposure at 8am: the bathroomcam has a 16 hour exposure! (2 days) #pinhole #day @pinholeday
— crunchy footsteps (@crunchyfeet) April 27, 2013


After my morning coffee, it's time to transform the bathroom into a giant pinhole camera for Worldwide Pinhole Day! @pinholeday
— crunchy footsteps (@crunchyfeet) April 27, 2013 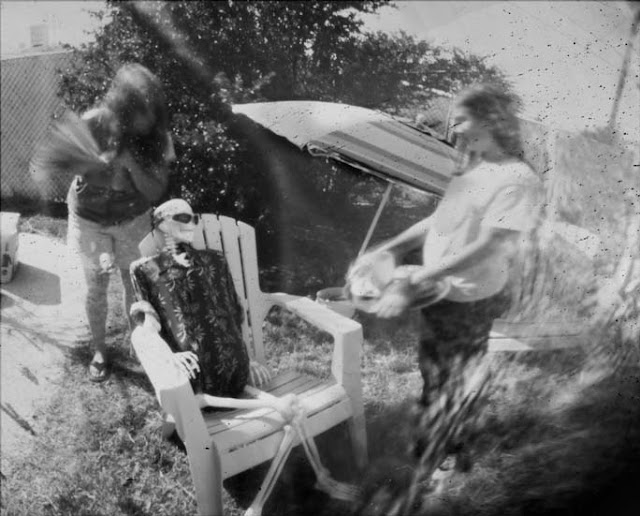 The bathroomcam image completely fogged!  What a bummer.  But here is a paintcancam rendition  of our catering to George, during his very arduous photo shoot.  The heat and lack of food were pretty hard to bear!  (-:

Here is a comment I left for this post on Flickr, after my pinhole pals there gave their suggestions on what I could do to have a successful image with the bathroomcam:

Thank you all, for the really nice comments on this image, as well as your thoughts on how to change things for future bathroomcam exposures! I appreciate you guys so much!


Judith- Thanks so much for that link to the article on The Great Picture. I had watched a "making-of" video of this project several years ago, when it was on Google Video. After Google Video went away, I could not find it out if it was migrated to You Tube, because I forgot the name of the project, and my search words didn't turn it up for me. Thanks to your article, I searched You Tube, and found the video! It's well-worth watching, for anyone interested:
www.youtube.com/watch?v=Nc-79vOzshw&list= PL27-EmZ05nT...

Rob Johnson, one of the photographers of this project, was interviewed in this video. If you go to 10:40 in the video, he explains the method for determining the exposure, and reveals aperture size and focal length. Like Judith said above, the aperture size was 6mm, and the exposure was only 35 minutes! He said that their initial exposure estimates were 6-7 days, but they came up with 35 minutes after doing some test exposures.

The emulsion they used was Liquid Light, which (in my limited experience) has about the same ISO as paper. So perhaps I can translate this experience directly to mine.
If you go to 11:16 in the video, you can see that they rigged up a "baffle" system like you talked about, Howard. It boxed the pinhole in around the sides and top, so that the light just shined on the film plane, and not onto the ceiling and walls. This limited the amount of stray light inside the camera. That's an excellent idea, Howard, thanks!

rt- that is also an excellent idea of flashing the paper first, to reduce exposure time.
Vince- Thanks for telling me about your experience of photographing the camera obscura image at the World of Illusions Centre. (that sounds like a great place to visit!) It gives me hope that i can do it, too. (-: It's goo to know how long your exposures were, too.

So I'll try it again with all your suggestions, and do some test strips before exposing the image. I'll keep you posted......
rt- Is there really a Cinco de Mayo Pinhole Day? (-: Are you participating? That does sound like a good day to try this again! It shouldn't be hard to secure a sombrero for George in this town. (-:
Sophie, Donna and Ned- thanks for your fun comments about this image! It was fun to cater to George to make this picture.

SO I'm off to make the improvements...in time for CInco de Mayo Pinhole Day!
Posted by Kristy Hom at 6:25 AM