How I love that old time photography!  (-:

As you may have seen occasionally in this blog, I have spent some time photographing with pinhole cameras these past few years.  Recently, Theresa of Rebel Homeschool was kind enough to inquire about what I know about pinhole, and about making cameras and images.  It was a timely inquiry, as Worldwide Pinhole Day is just around the corner (April 29th), which is the perfect time to do some pinholing!

Inspired by Theresa, and the upcoming Worldwide Pinhole Day,I am writing a little pinhole series, hoping that it may excite a few folks into participating !

As the name suggests, a "pinhole" camera (or "camera obscura", as originally coined) is a very simple device consisting of a light-tight box, and a very small hole to let the light (and image) in.  The is no lens to focus the image inside the camera, rather the "pin" hole is so tiny, that the light comes through the hole in an organized manner, and converges inside the box to form an image. 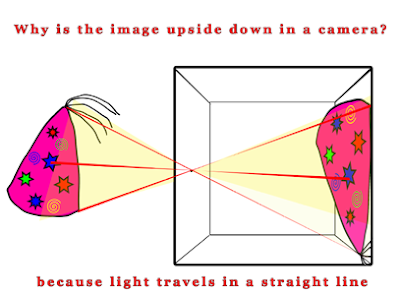 In the illustration above, you see the the light, reflecting  a party hat outside the camera, travel through the pinhole,  converging inside to form the image on the back wall of the camera.  If you want to make a picture of this image, a recording medium must be placed there and be exposed correctly.  Common recording mediums include film, photographic paper, or a CCD sensor of a digital camera.
In all cameras, (including our own eyes) the image rendered inside is backwards and upside down compared to it's orientation outside the box.  Why is that?  It's because the light from the image is entering the camera more or less in a straight line, and converges into the image along that straight line inside the camera. (look at the illustration above to get a better idea)
It is not known how long humans have noticed this pinhole image-making phenomena, but one can bet it has been noticed for a very, very long time.  Sunlight cast through holes in leaves, for example, will make images on the ground.  Small holes in tent walls will project images from the outside onto the opposite wall inside. 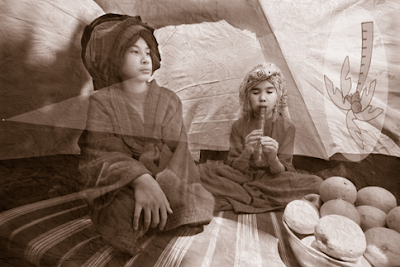 Some documentation exists of desert peoples long ago using pinhole to see the goings on outside their tents during the day, as in this example above.  (-:
The first-ever recorded "permanent" photograph is credited to Joseph Nicéphore Niépce, who made the image with a pinhole camera in 1825 or 1826.  Below is his first-ever photograph:

1825 or 1826: View from the Window at Le Gras, Joseph Nicéphore Niépce made with a camera obscura. source:  Wikimedia Commons
Much has changed since those days- with lenses being affixed to cameras, and improved optics and technology up to this day.  But there are small movements everywhere to go back and experience the processes of our photographic roots. and use it's most basic form to make very interesting photographs.  Below is a slideshow of modern-day pinhole photography, using homemade and manufactured cameras, film, paper, or digital camera sensors as means of recording the images.  Please enjoy this collection of pinhole photographs from around the world:

Coming up next time:  Worldwide Pinhole Day defined, and making your own pinhole camera

Posted by Kristy Hom at 7:58 AM No comments: